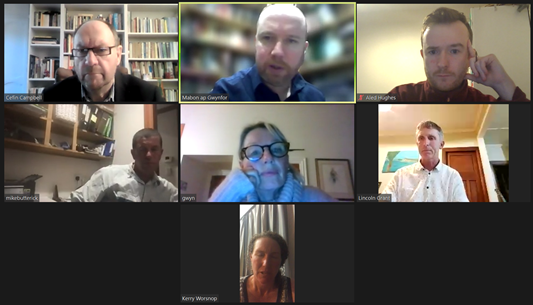 Plaid Cymru Members of the Senedd, Mabon ap Gwynfor and Cefin Campbell have met with a group of New Zealand sheep and beef farmers to discuss concerns regarding the blanket planting of woodland on fertile farmland by multinational companies.

The farmers were representatives of ‘Fifty Shades of Green’ – a volunteer lobby group set up to oppose and raise awareness about the thousands of hectares of New Zealand farmland being lost to multinational businesses and carbon speculators for blanket woodland planting for carbon offsetting purposes.

The virtual meeting was an opportunity to learn about the situation in New Zealand - and draw parallels with the situation in Wales, where the Farmer’s Union of Wales has recently warned of entire Welsh farms being bought by outside companies for tree planting almost on a weekly basis.

The group argued that the New Zealand government’s incentives to plant trees, to offset greenhouse gas emissions and meet reduction targets, were tilting the market too far in favour of both domestic and overseas forestry investors – thus damaging rural communities, the environment and food production.

The group noted that the growing trend of afforestation had seen farmland prices skyrocket – with the next generation of farmers being priced out of the market, and future food production likely to be hampered.

“We welcomed the opportunity to meet with Mabon and Cefin and share the experiences faced by communities across New Zealand of fertile farmland being purchased by overseas companies and carbon speculators for blanket forestry.

In New Zealand, our hill country farms are increasingly becoming the sacrificial lamb in our country’s effort toward managing climate change. This is turn has a detrimental impact on our rural communities, nature, and crucially food production – concerns we understand are increasingly being replicated in Wales, and other countries across the world.

Such blanket afforestation is contrary the Paris Climate Accord which recognizes that food production is of vital importance, and furthermore undermines the crucial work farmers already undertake in combatting climate change and maintaining the environment.”

In Wales, previous research by Plaid Cymru found that since 2015, over £1.3 million Welsh Government funding for tree planting has gone to applicants outside of Wales. With growing media attention and public concern, there are increased calls for greater measurers to address this trend – and the Co-Operation Agreement between Plaid Cymru and the Welsh Government has ensured a commitment to explore ways of drawing investment for woodland creation that secures local ownership and control.

“I was delighted to have the opportunity to meet with farmers from New Zealand and learn more about the challenges the agriculture sector and rural communities are facing because of blanket afforestation.

The growing parallels between New Zealand and the situation developing in rural communities across Wales is alarming, and whilst such brazen ‘greenwashing’ may ease the conscience of climate savvy multinationals, it is hurting the very fabric of our agricultural communities and threatens to transform us into an extractive economy.

Whilst it is crucial that we meet our climate change obligations, doing so in a balanced and sustainable way is vital - securing an approach that delivers the right tree, in the right place, for the right purpose.”

" It was very useful to meet with farmers from New Zealand and learn more about their own experiences in relation to fertile farmland being lost for tree planting purposes.

Over the past few months alone I have met with communities across Powys, Carmarthenshire and Pembrokeshire who have expressed concerns regarding this blanket ‘greenwashing’ by absentee multinationals, and the detrimental effect this is likely to have on our farmers, food production and rural communities.

One of the salient points made by the New Zealand farmers was that the tree planting approach had a limited value in terms of carbon capture as it could only be tied to the first rotation of trees which had a timespan of about 30 years. They believed it not only fails to make any long-term business sense, it also locks up land and takes away the livelihood of future generations of farmers.’